Raising children is one of the most difficult jobs for parents to do. As a parent, we become anxious and upset when our children don’t behave or say obscene words. When someone is questioned about their parenting, it feels as if everything we have done has gone with the wind.

Well, every parent wants the best for their kids. Therefore, we all want to know those parenting secrets to get better at this. We have spent hundreds of hours researching and reading those articles written about a healthy upbringing that paves the way for the future of their children.

Here are the top ten that would make it to this blog.

Tips for a father in raising children

We should not punish the children before setting the rules and do not blame them for anything after allowing a certain behaviour by reducing giving orders and trying to talk to and discuss with the children.

Don’t we force the child to be a copy of the father and mother and give him the freedom to be different?

You should talk to him and tell him what he can do or talk about, and what he can’t talk or do.

Don’t force a child to be a copy of you.

For parents to be role models and to be consistent in their actions and words so that their children learn from them.

You should not complain about him or mention his shortcomings in front of others, especially in his presence.

Praise must be specific; That is, he has to do a specific act such as helping you at home or helping his brothers without saying “You are wonderful.”

Establish a daily routine of waking up, eating, studying and even playing so that he gets used to the system.

Speak about the father on good terms in front of him, no matter how you feel, as well as the father As the father, represents the role model and the source of safety for the children.

With a lot of beatings, the children are not affected. Some parents tend to hit and abuse their children when they do not do what is asked of them, or when they deviate from the boundaries of etiquette.

It is necessary to avoid excessive pampering of children and its disadvantages first, as well as excessive cruelty, Such as frequent beatings, and that there should be a balance in giving children love, tenderness and safety as well

Also, one of the common mistakes is the inequality between children in dealing, punishment or pampering, and this makes children feel jealous of each other

Rules that a father must abide by

Ask your child for help

stick to a specific daily routine; Meaning setting a time for eating, sleeping and resting, watching TV or playing, and also studying so that the child realizes the value of time

Ask your child to help and participate in providing the service; This teaches children cooperation and the meaning of feeling for the other

Teaching the child to put things in their place, whether clothes or toys, and this teaches children cleanliness and order

be the example yes; Where parents are role models for their children in everything: behaviour, speech, how to treat others, and others

1- Some parents unintentionally put pressure on their children academically and socially. Where parents pressure the child to study and become the best, and to be among the first, without looking at the tendencies, talents and abilities of the child.

To make your child feel that he is a very special and unique person – some parents find it difficult – despite what gives this child a very high sense of self-confidence that helps him in building his personality, and making him grow in a healthy psychological way

And the mother must give her son confidence in expressing his opinion, and she must listen to him well, and take his opinion into account, all of this helps in building the child’s personality, and gives him great self-confidence.

Parents have to develop with their child; Yesterday he was a child, and tomorrow he will become a young man, so parents should not stop at the childhood stage with their son, and they should realize that their children are growing day after day and year after year, especially in adolescence.

This bad mood, which accompanies some parents when they are at home and among their children. Make them in a state of anger and motivation for any mistake made by the son

The father and mother should be careful not to discuss their son while they are in this case, as this kind of discussion, in this case, is useless, and even has a negative impact on their son.

Their role is to teach them the style and culture of discussion in any decision that concerns them or the family; Because this dialogue and discussion earns the child or adolescent confidence in himself, and teaches him to think and debate.

In short, they refuse to give the child a measure of freedom of opinionMás

Provide a kind of freedom for children to teach them independence and freedom of expression, where they do not have to impose the type of food, the form of clothing, or the type of college the child will study in; Because excessive interference deprives children of freedom and independence, and creates in the future a dependent and dependent person.

Parents must have the same approach and method in raising their children, as the difference in the rules that the house will follow creates a kind of separation for the child.

Learn to Negotiate with your Kids

Negotiation is an important skill used multiple times everyday, at work, at home and sometimes even while shopping. Today we… 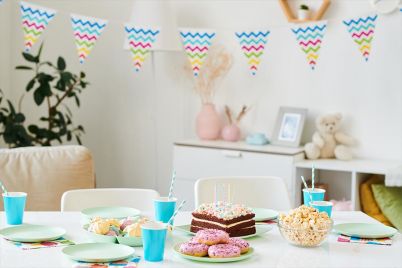 7 ways to plan kids’ birthday parties on a low budget

Your child’s birthday event will always be a special celebration for you, and you will want to commemorate it each…